Cookies help us deliver our services. By using our services, you agree to our use of cookies. More information

From AU Science Wiki
Jump to navigation Jump to search

Our collection includes examples of invertebrate groups that this class observed while on field trips[1].

Adaptations to Life in Water [3] Muscular-Skeletal: A flatworm has no skeletal structure. There are two muscle layers under the skin help move tiny legs located beneath its body. The flatworm contains three layers of cells.

Digestion/Excretion: The flatworm combines its digestive and excretory system by using the same opening to take in food and expel waste.

Nervous: A flatworm’s nervous system consists of two strings of nerves on each side of its body. It uses two small brains, also known as ganglia, to monitor the nerves. It also incorporates two eyespots to gauge light.

Respiration: A flatworm does not use a basic respiratory system, but takes in oxygen.

Reproduction: A flatworm multiplies by splitting in half to create two flatworms.

Appearance: A flatworm varies in size from microscopic levels to several feet in length. Its body is typically thin and symmetrical.

Snails like to live in flowing streams and creeks that have hard battoms that they can attach and craw over. [5] Their main source of food is algeae but they also eat decaying matter. Ramshorn snails also can carry parisitic flukes, so beware [6].

Fun Facts Gary the snail off of SpongeBob is a ramshorn snail. [7] 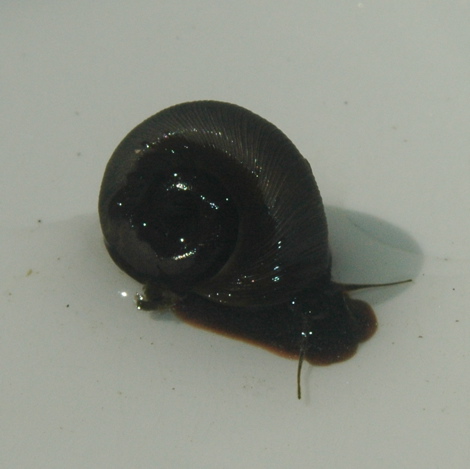 Biological Description [8] Centipedes are flat, worm-like arthropods. They sport a pair of legs for each segmented part of their body. The reddish-brown creatures are carnivorous and use poisonous jaws found under the mouth to eat cockroaches, house flies and other small insects. They lay their eggs in the soil during warmer months and constantly protect them. They do not harm plants, furniture or food supplies. Habitat [9] Centipedes are most often found in moist habitats. Outside they can be found under stones, boards, or compost piles. Inside, they tend to congregate in damp and moist areas like basements, closets and bathrooms. 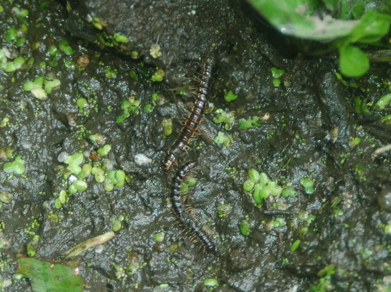 The Argiope adapts itself to life near water by creating a web above the water surface. It uses the web to capture its prey. They are able to form different kinds of webs such as; threaded webs and liquid silk. The liquid silk webs are used to capture its prey making it difficult for the prey to escape. The threaded webs allows the spider to move freely outside the web and provides a safety mechanism for the spider by producing a drag line to move to the ground from the web. In autumn, the Argiope uses the plants near the water to lay it's eggs on in a small cocoon.[10]

We found this spider at the AW 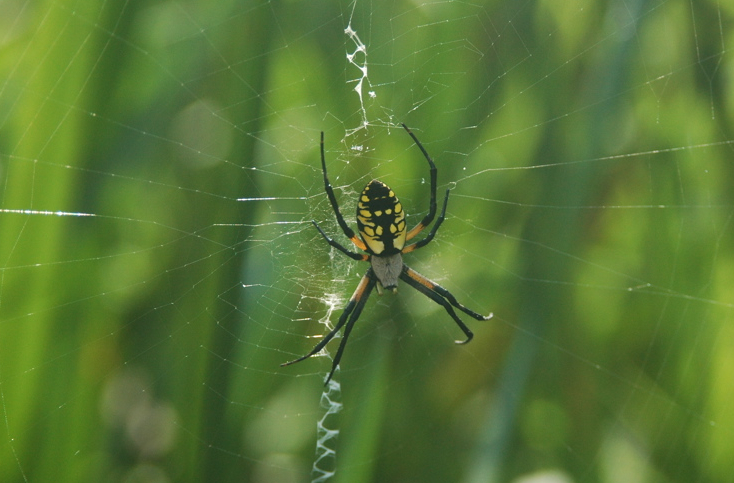 The female banded garden spider usually stays in the middle of the web throughout the day and night. This allows the female to repair the web when torn or disturbed. The female spider can lay one or more egg sacks that can hold up to 1000 eggs each. The "spiderlings" transport themselves through a process known as "ballooning"[13].

The male banded garden spider is considerably smaller than the female. Males do not produce webs and are rarely spotted on or near the web. They typically wander around the vegetation in search of a mate[14].

The banded garden spiders die after the first frost of the year allowing only one generation to be reproduced per year[15]. 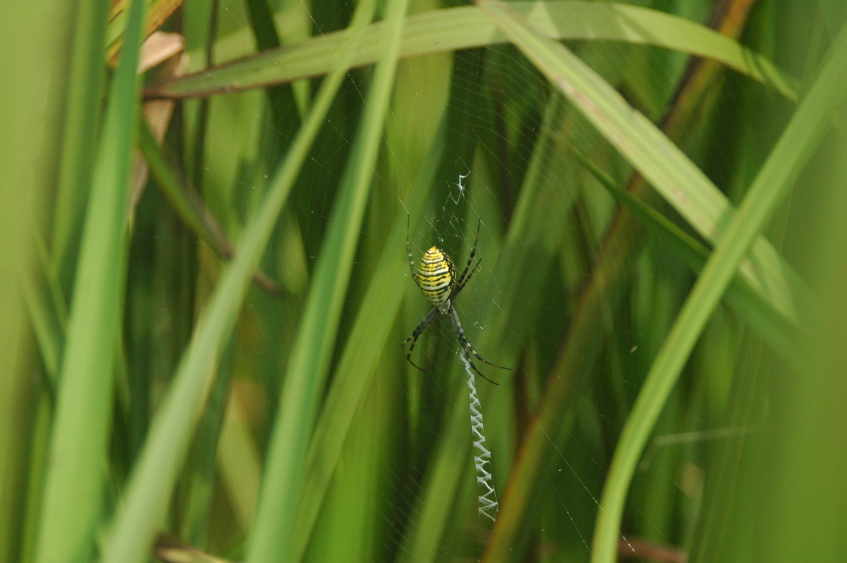 These spiders can run along the surface of the water. They use the water surface like a web to detect vibrations and locate prey.

They differ from other water based spiders due to the fact that they stalk their prey rather than catching in a web. This particular species of the Dolomedes never leaves the water and sometimes dive beneath the surface of the water when threatened. Their diet typically consists of small fish and aquatic insects. The mother Dolomedes carries her egg sac which can measure up to 14 mm in diameter in a spherical shape placed underneath her abdomin. The female egg sac can contain up to 1400 eggs. Shortly before the eggs hatch, the mother attaches the sac to vegetation, builds a nursery web around it, and stands guard nearby. [16] 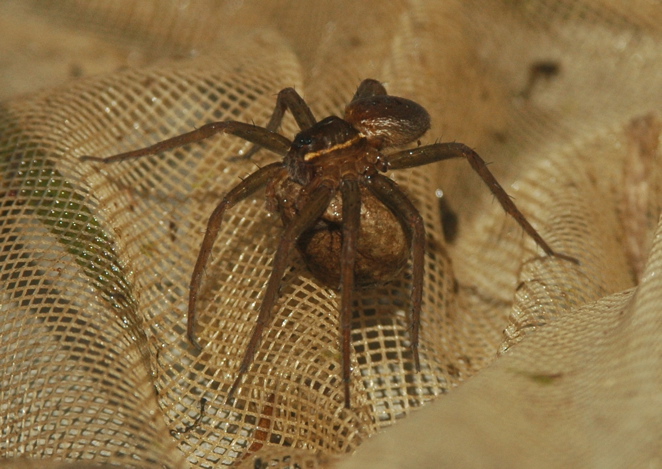 This female is carrying her egg sac.

Crayfish have many nicknames including crawdad and crawfish. They live almost exclusively in freshwater, however some can survive in saltwater. The crayfish uses gills to breathe oxygen that is dissolved in water.

Diets of the crayfish include organisms such as algae, snails, tadpoles, insect larvae, and sometimes vegetation. They are preyed upon by some turtles, fish, and alligators (where applicable).

An average crayfish comes in at around 3 inches long. They have four legs that extend from their thorax and two pinchers that extend forward as well. Their legs are used not only for walking but for finding food in between rocks. Their pinchers are used for finding food, attacking it, and defending itself from attacks. Crayfish move slowly unless frightened. If frightened, they flip their tails to swim backwards away from predators. [18] 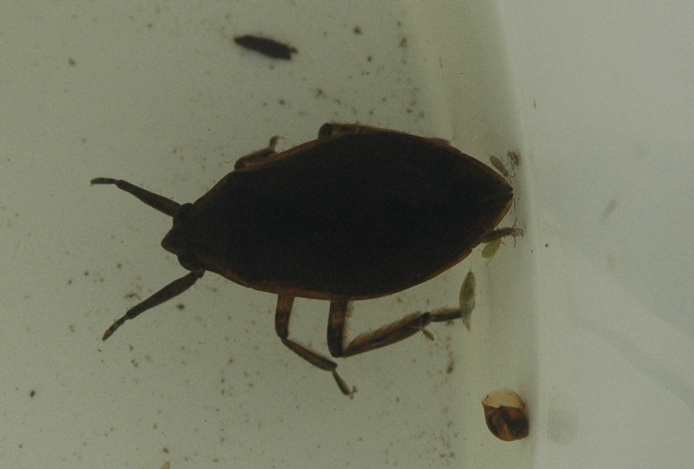 The amphipods are green and swimming around the posterior end of this giant water bug.

One way to distinguish a beetle from other insects is that it has six legs, antennae, and hardened wings.[19] All beetles go through metomophosis which means they start as an egg, become a larva, then pupa, and finally adult.[20]

Most beetles are pollinators, but some get the dirty job like the Dung Beetle which eat the dung of herbivors. Some beetles like the silphids enter animal carcasses and use it for food for their young, this process gets rid of rotting carcasses, therefore cleaning up the world. [21]

There have been more than 250,000 different species of beetles found throughout the World. This equates to more than one-quarter of all the animal species that exist today. [22] 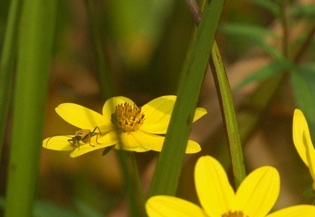 The egg stage last 2-5 days, then the Larval stage (which is seen in this picture) last 21 days, the Pupa stage last 7 days, an adult ladybug can live upto 3 years if conditions are right. The ladybug's favorite food is the Aphid.[23]

There are nearly 5,000 different kinds of ladybugs worldwide and 400 of them live in North America. A female ladybug will lay more than 1000 eggs in her lifetime. A ladybug beats its wings 85 times a second when it flies. Along with that a ladybug won't fly if the temperature is below 55 degrees Fahrenheit. Just one fun fact as well; A gallon jar will hold from 72,000 to 80,000 ladybugs. [24] 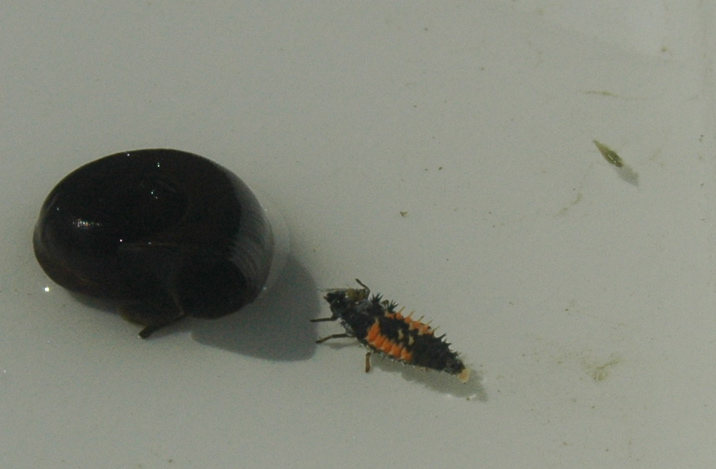 Note the orange and black spines! 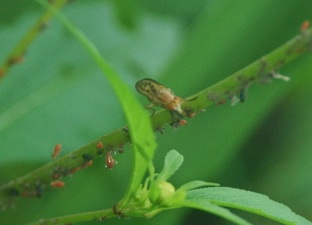 Mosquito larvae are sometimes identified as "wigglers" or "wrigglers". The mosquito larvae need to live in an aquatic environment for 7 to 14 days. The time needed in water varies depending on aquatic temperature[25].

The mosquito larvae experiences four stages of growth in which they shed their skin during each stage. The stages in between growth and shedding periods are called instars. At the completion of the four stages, the larvae is 1/2 inch in size[26].

The majority of mosquito larvae have siphon tubes to aid in respiration and breathing. These tubes hang from the surface of the aquatic environment. The mosquito larvae prey on micro-organisms throughout the water [27].

This picture illustrates the life cycle of a mosquito larvae[28]. 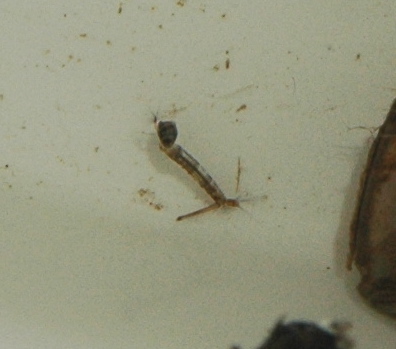 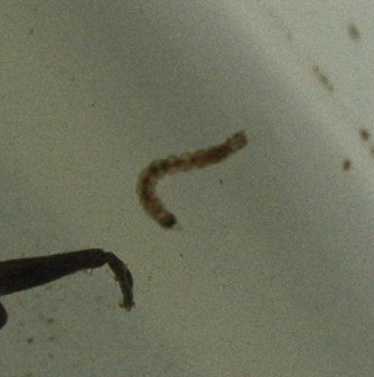 The technical name for aphids is disambiguation. They can be found in the hemiptera order. Aphids are annoying to farmers, and gardeners, but can be controlled with ladybugs. Aphids have wings and can easily migrate by floating through the air with their wings. Aphips feed in colonies which make them especially destructive. [29] 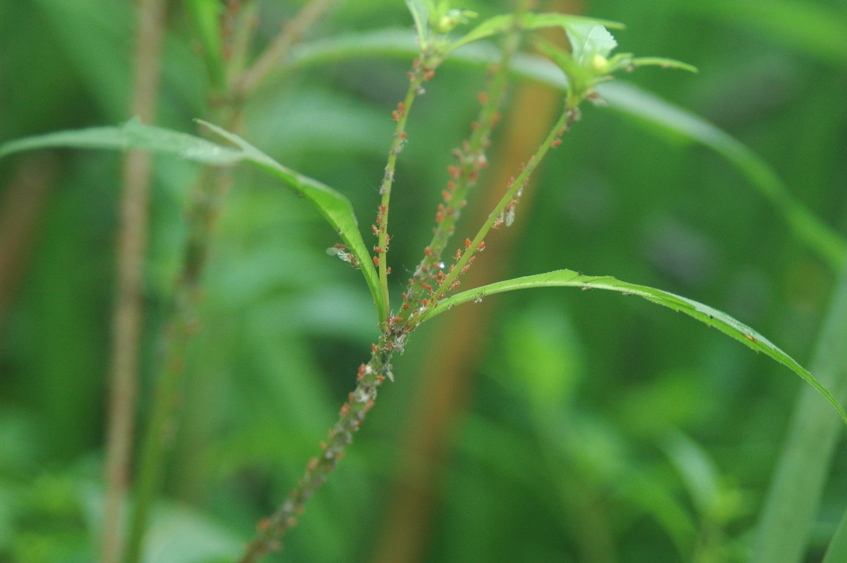 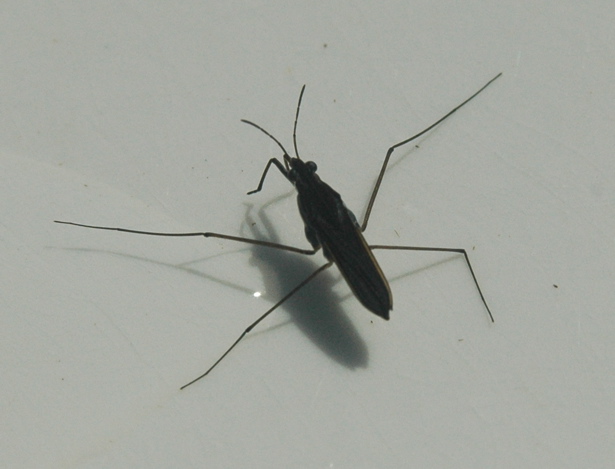 The water strider is part of a family of insects known as Gerridae and is a predatory insect which relay on surface tension to walk on top of water. They live on surfaces of ponds, slow streams, marshes, and other quiet waters and can move very quickly across waters. [30]

Being both predators and scavengers, water striders eat many invertebrates such as mosquito larvae, seed shrimp, and insects. They hunt their prey by the vibrations felt through the water and slices his mouth into its prey and sucks it dry. Water striders cannot recognize motion above or below the water surface which benefits their predators, such as birds and fish. [31]

Water strider’s legs hold air bubbles in their water-repellant hairs which allow them to move upon the water at a faster pace. The ripples they make on the water as the move are attended to attract mates. They have the capability of going underwater in which they are commonly forced to do so when escaping predators. Water striders are pollution-tolerant. [32] 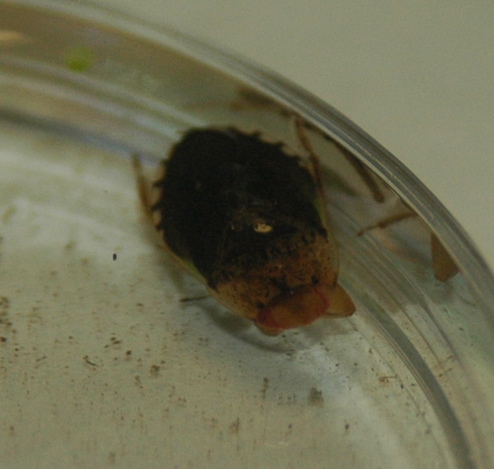 The water boatman or Corixidaeis part of the "true bugs" family. It is known for it's oar-like legs that make it easy for it to move through water quickly. The water boatman both can come up for air when it needs it, or use their body and wings to trap an air bubble which later can be absorbed into it's skin. They eat algae and are important prey for larger organisms; they keep the ecosystem in balance. We saw this invertebrate at the BFW in the test tube. We could see how it frequently went up for air and swam very quickly with its long legs. 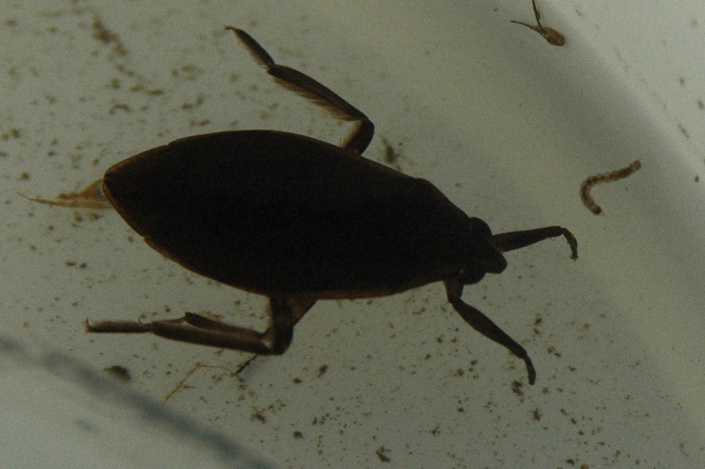 The hairs on this giant water bug's limbs are hydrophobic and help it break surface tension when it wants to go to the water's surface.

The giant water beetle, or Belostomatidae can eat things much bigger than itself, such as small animals, frogs,salamanders, and fish. To breath they hold onto a plant in shallow water and use their breathing tube to get air. They can wait like this for extended periods of time waiting for prey. Another name for these bugs is the diving beetles or toe biters. They are commonly asked about because they turn up under streetlights and might be mistaken for cockroaches. We observed the giant water beetle eating another type of beetle and attempting to feed on tadpoles at the BFW. The giant water beetle is one of the largest insects in the United States.

Hymeoptera derived from the Greek word hymen, meaning membrane and Ptera meaning wings. [35] Viewed at the Audobon Wetlands in Ashland Ohio near rout 250 and Interstate 71(AW). The way these animals use the aquatic wetland is by pollinating the blooming flowers in this wetland. [36][37] 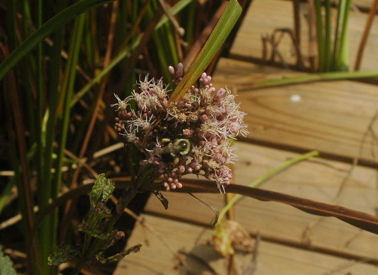 The genus name is Lepidotera meaning scale wings. The scales give butterflies their color and help them fly by catching the air in between the individual scales.[38] All butterflies go through 4 stages of life; egg, larva, pupa and adult.[39] This animal was observed at the Audobon Wetlands in Ashland Ohio near route 250 and Interstate 71.(AW) These animals pollinate the wetlands blooming flowers. 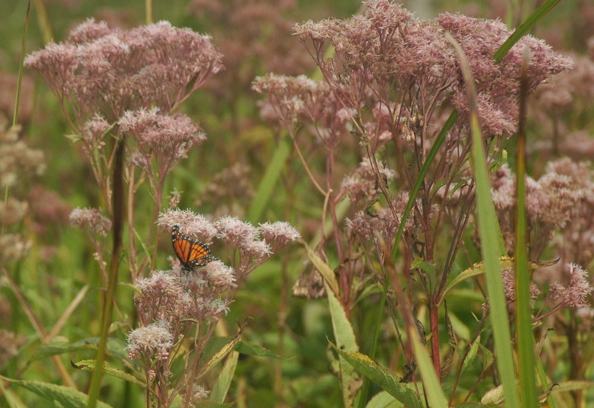 Both the Damselfly and the Dragonfly live near water because that is were they lay their eggs. [40]

This type of dragonfly larvae eats aquatic insects such as larvae and shrimp. Adult White-Faced Meadowhawk's eat soft bodied flying insects such as mosquitoes, moths, and flying termites.[41] To view more photos you can visit http://www.stephencresswell.com/d/obtrusum.htlm. 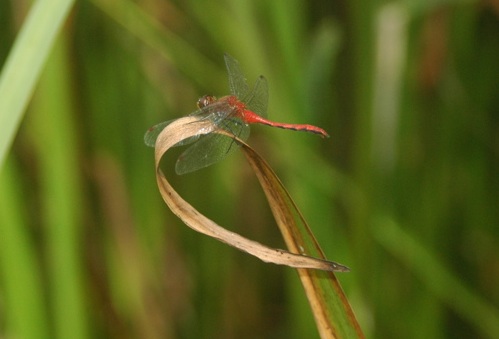 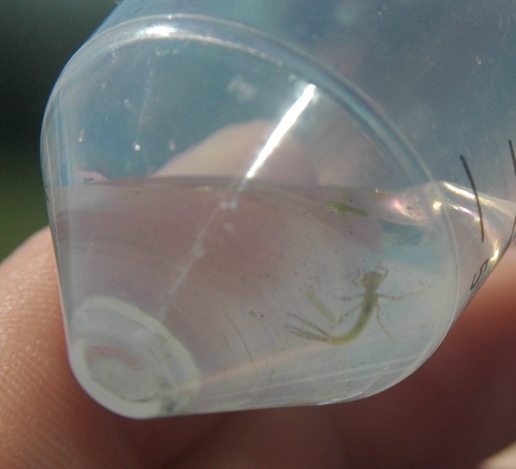 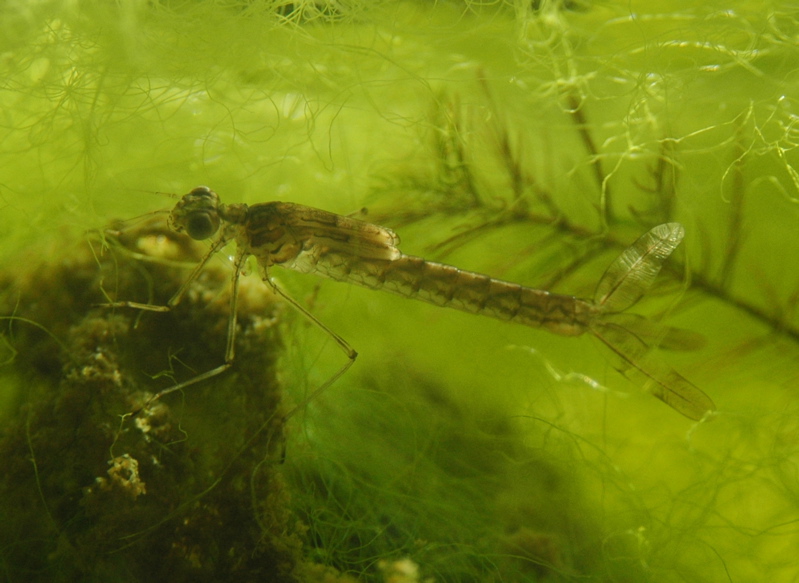 The red-legged grasshopper does not primarily live in wetlands. This wetland happened to be next to a field of crops and high grasses. Its primary habitat is along side roadways, in crop fields, high grasses, and low moist weedy areas. This species has not adapted to live in wetlands. [43]

It mainly eats a variety of grasses along with crops such as: corn, tobacco and vegetables. Due to its diet on crops it can be a large impact on the economic side of farming. A large group of Red-Legged Grasshoppers have the ability to wipe out an entire field of crops.[44] 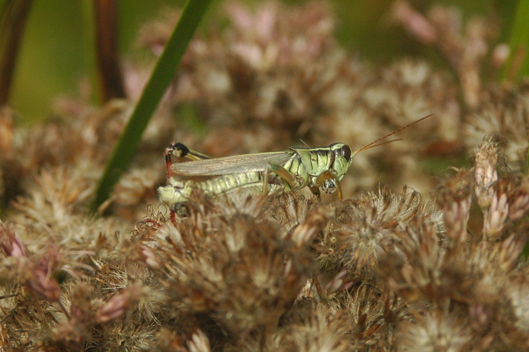 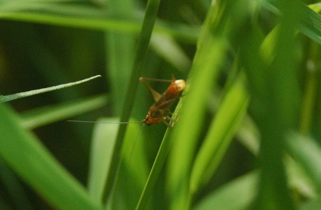